Where the Bleep have I been?

Obviously, I’ve been gone for a while.  Mr. Alpha Dog and I have had a rough patch, having to say goodbye to all three of our beloved pooches in under a year and I’m still terribly heartbroken.

Java and Maxshadow several years ago

The ancient one, Maxshadow, was old; Really old. I believe he had some kind of mini-stroke that February morning, as he was very wobbly.  He was also 19 years old.  Ancient for a 55 lb. Lab mix.  He slipped on the ice that week and had taken a hard fall.

After 3 days of carrying him outside and supporting him so that he could do his business, we made the tough but necessary decision to put him down.  He had been losing weight, had a tumor growing in his mouth and frankly had gone pretty darned far down the rabbit hole, into senility. We had been expecting him to pass for a couple of years, but taking after his human momma, he was too stubborn to go on his own. I held him tightly, while muttering happy things into his deaf ears, as he left this realm, with help from the local veterinarian. I had no idea that he would be only the first in a miserable “Trifecta” of loss.

High Octane Java went next, 6 months later.  I knew she was going down hill quickly.  She’d lost her endurance, her zest for life was only in spurts and eventually, she simply quit eating and drinking.  I force-fed her watered-down chicken broth via a pipette and rushed her to the veterinarian who had diagnosed her with cancerous mammary tumors, ( surgically removed,) 5 years before.  I had refused Chemotherapy and other options at that time.  I watched both my mother and my sister succumb to the agony of cancer “treatments.”  I would not put my dog through that misery.  Instead, I went with full extract cannabis oil.  (I never mentioned that here as it wasn’t exactly legal in Washington State at that time.) I credit that treatment with 5 extra, good years with my Java and I wouldn’t hesitate to do it again. (FECO is now legal in Washington.) The vet found a mass in her abdomen, so we tried a last ditch exploratory surgery. He found her spleen enlarged to 10 times normal size and her liver riddled with tumors.  10 days later, I sang her the dumb little ditty I always sang to her, as she took her last breath.

Not even 2 months later, Dakota, our 14 year old Samoyed started having nose bleeds, his behavior became erratic, x-rays showed a large mass in his head. By January, it was his turn for the veterinarians needle.

It’s been almost 17 months since Dakota went to that dog park in the sky and Steve and I remain dog-less. We both needed time to grieve the pets that had shared our lives for the last 20+ years.  In all honesty, I don’t recall ever feeling more lonely. 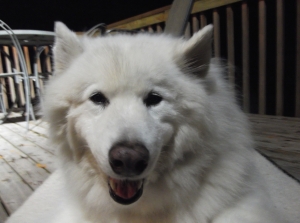 Dakota 1 month before the nosebleeds started

We’ve finally decided to get a puppy. (A decision that I haven’t taken lightly as for the first time in my life I have to consider that a dog I get now, may out-live me, morbid as that may seem.)  I’m still wondering if someone will show up at our door to give us a puppy, (which is how we came to have our first dog together, the infamous Starbuck. However, that tale is for another day.) Or if we’ll find the right dog at NOAH or on Petfinder…   I do have a backup list of breeders to consider.

1st step is to puppy-proof the house, a task that is taking far more time than anticipated.  Then again, I’ve been such a wreck, that this place is a total disaster area.

I do promise to tell you more stories of our lives together… Once the newest “Adventure Dog,” joins the pack.  We’re hoping to make the new addition around September, when the busy summer boarding season is over, however, the best laid plans….

I am praying for a new best friend and missing the ones that have gone before.

I'm the "Alpha Dog's" wife... Life Partner and Co-owner of Adventure Dog Ranch, The Vacation Destination for Dogs! A place where canines socialize, exercise and have fun. You don't have to feel guilty when you take a vacation, your dog can have his very own vacation with us!
View all posts by adventuredogs →
This entry was posted in Adventure Dog Ranch, Saying Goodbye to a pet, Uncategorized. Bookmark the permalink.